This blogpost was migrated from the previous content management system that hosted this blog. If you want to check for old comments or to find anything looking weird please follow this link to check the Internet Wayback Machine.

Over the last six years Raf Roset, one of my favourite geonerds out there, has been sending all the cool stuff he founds about our geospatial world to Barcelona mailing list at OSGeo mailman server. He started circa 2011 sending one link per mail, but in 2013-04-03 he started to make a daily digest. A gun burst in Spanish is called Ráfaga so the joke was really at hand when someone proposed to call those digests that way.

Then in May I join CARTO and @jatorre thinks is a good idea if I can send them to the whole company mailing list so after some weeks I stop translating them into Spanish. Since that day I only do it English, trying to follow Raf lead everyday translating his mails and forwarding them to CARTO internal mailing list and the rest of the OSGeo ones.

Also at June I decided to put those mails in a simple website so the Ráfagas would also be accessible on GitHub and a static jekyll website so anyone could use the Atom feed to reach them.

Final chapter, in July I also decide to create a dedicated mailing list just for those people who are only interested in receiving those digest mails, obviously thinking in a broader audience, not just my fellow friends from Spain. I think at some point I will stop sending them to the Spanish lists because normally Ráfagas don’t fire any discussion and I’m sending the same message to three lists. To be fair they sometimes provoke discussions at CARTO mailing list. By the way I’m almost certain the full team has a filter to move them to their archives and they think I’m just an annoying spammer (a couple of times I’ve changed the subject just to troll them xDDD).

To conclude I want to post here my daily Ráfagas experience: 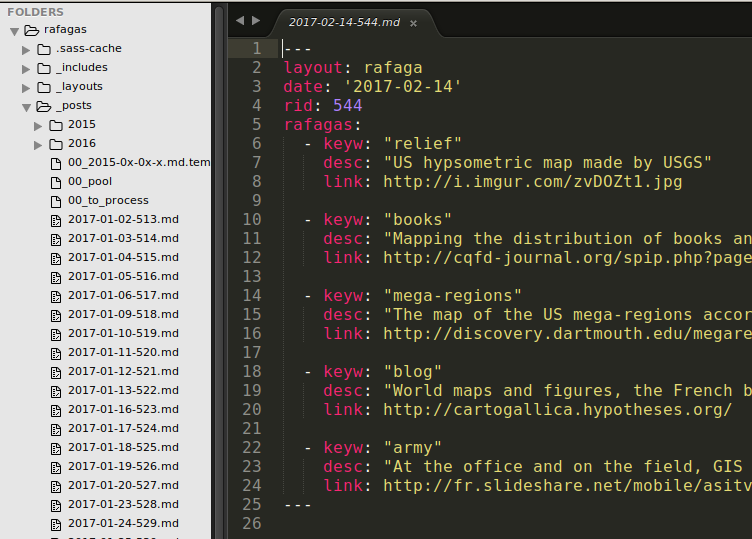 That’s it. Raf you are a formidable example of perseverance and I hope you’ll have the energy to keep giving us all those contents for many years. Thanks mate!